I feel like I need to put something up here, since I went off on Kickstarter a bit two days ago.

On Wednesday morning Kickstarter was sent a blog post quoting disturbing material found on Reddit. The offensive material was part of a draft for a “seduction guide” that someone was using Kickstarter to publish. The posts offended a lot of people — us included — and many asked us to cancel the creator’s project. We didn’t.

First, there is no taking back money from the project or canceling funding after the fact. When the project was funded the backers’ money went directly from them to the creator. We missed the window.

Second, the project page has been removed from Kickstarter. The project has no place on our site. For transparency’s sake, a record of the page is cached here.

Third, we are prohibiting “seduction guides,” or anything similar, effective immediately. This material encourages misogynistic behavior and is inconsistent with our mission of funding creative works. These things do not belong on Kickstarter.

Fourth, today Kickstarter will donate $25,000 to an anti-sexual violence organization called RAINN. It’s an excellent organization that combats exactly the sort of problems our inaction may have encouraged.

We take our role as Kickstarter’s stewards very seriously. Kickstarter is one of the friendliest, most supportive places on the web and we’re committed to keeping it that way. We’re sorry for getting this so wrong.

My understanding is that Kickstarter made, gross, about $800 on this project. Obviously, they were faced with PR losses that dwarfed that figure; obviously, this and everything else a corporation does was largely or entirely a business decision. There are people who will be upset about this, who will say they should’ve done even more, or acted faster, or whatever.

Please don’t be those people. We live in this world, where businesses do, you know, business, and this is the best public apology I’ve ever seen (leaving aside a couple missing commas). It seems truly genuine, it’s titled “we were wrong,” nowhere does it say “we’re sorry you were offended” or “we apologize to those who were offended” — the company takes full responsibility, then donates thirty-one times what it earned on this project to a very worthy organization (honestly? When I got to the $25,000-to-RAINN part, I teared up a bit). Yes, I think they could have pulled the project (and if they don’t have some procedure in place for pausing projects pre-funding to allow for fuller review, I think they’d better come up with one quickly), but I can also appreciate that it was a sticky situation they were in, not the kind of thing that a corporation’s leaders and lawyers can usually work their way through in two hours. It’s really a tragedy that Hoinsky gets his $16,000…but he might have gotten this funded through other, less conscientious venues anyway. Failing having stopped the process before funding, I think this is the best they could possibly have done.

Obviously, I had nothing whatsoever to do with this…my little screed was just between you, me, and the like two or three other friends and relatives who are reading this right now (okay, like 300 people or something saw it; still basically nothing). But I still feel proud, like, for people in general. For the power of the internet in the right hands. And so on. As Chuck Wendig said on Twitter a bit ago: “This is why you shouldn’t listen when people get cranky about Internet outrage and claim it to be temporary & useless.” Sometimes a little well-placed anger, repeated thousands of times over, can do great things.

So I’m happy, and I’m a big Kickstarter fan again. Now to puzzle over whether my Big Plans (which were in large part a response to this) are still worth doing…if you’re one of the six or seven people I’ve shared them with, I’d welcome your input on that. Or if you’re not and just want to guess and comment below anyway, I’d welcome your input, too. 🙂

I had big plans for today (Wednesday). Really Big Plans, in fact. I still do have those plans, and I worked a little bit on them today, and will probably work a little bit more on them tonight. I’m excited about these plans, and hope they become a Thing That Happens, and that I can share with you soon.

But it turns out that tonight (Wednesday night) is not a night for Big Plans. Today (Wednesday) was a day of untimely deaths; of way too much hate, generally; of bizarrely crappy deniapologies; of incredibly blasé and casual celebrity racism; and of a bit of personal stress and discouragement (nothing major, but overall: oy, today). Tonight, then, is a night for family, and beer, and baseball, and possibly video games. There will be better days for Big Plans, and probably soon.

Instead, I want to talk for just a second about this. If you missed it, on Wednesday morning the internet very suddenly became aware of a Kickstarter project called “Above the Game: A Guide to Getting Awesome with Women,” through which a mouth-breathing and probably badly deluded little lump of diseased chipmunk feces named Ken Hoinsky sought $2,000 to finance his book doling out advice regarding how to successfully get women in bed. He ended up raising over $16,000.

It sounds innocent enough, if incredibly dumb; these “pick-up artists” lurk in creepy dark little places everywhere, and while stupid and probably not strictly harmless, they aren’t exactly Public Enemy No. 1. This is a lot worse than that, though. Hoinsky wisely wiped the existing segments of his book from the internet, but a wiser blogger/comedian named Casey Malone (who appears to also deserve credit for calling this to everyone’s attention in the first place) was able to archive some of his words. There are too many atrocious bits for me to pick big chunks to share here, but the gist of the worst bits were: first, always be “escalating,” making more and more intrusive physical contact with the woman you’re creeping on, and don’t stop until she shouts “NO” or pushes you away (and even then, maybe just take a break and try again later).

A bit later (all emphasis Hoinsky’s): “Physically pick her up and sit her on your lap. Don’t ask for permission. Be dominant. Force her to rebuff your advances.”

Later still: “Pull out your cock and put her hand on it. Remember, she is letting you do this because you have established yourself as a LEADER. Don’t ask for permission, GRAB HER HAND, and put it right on your dick.”

That’s sexual assault. All of it. It’s sick, and it’s quite reasonably very illegal. It’s a step-by-step manual for dehumanizing and sexually assaulting women, and it leads you right up to the doorstep of rape. It plainly violates Kickstarter’s guidelines, which bar offensive content (specifically listing hate speech, which I’d argue this is, as an example). Kickstarter must have received thousands of “reports” through its own website and thousands of tweets bringing this atrocity to its attention.

As I write this, Kickstarter’s twitter account hasn’t tweeted in more than 24 hours, and the company has allegedly directly refused comment to at least one media outlet. No action, nothing to justify its inaction. (Later update: they did eventually issue a kind of milquetoast statement. Malone has it, and a bit on why it was the wrong call, here.) It’s a disgrace all around. I was happy to participate in one Kickstarter project (both as a writer and a “backer”) a while ago, and this probably won’t keep me from using it again, but it’s terribly disappointing.

Think about this, though: there are 732 people (almost all men, of course) who backed this project. Now, I don’t actually believe Hoinsky has ever followed his own advice in any meaningful way — both (a) because the people who espouse this sort of nonsense tend overwhelmingly to be sniveling inarticulate lying dullards who aren’t actually capable of talking to or making eye contact with a woman and (b) because I have enough faith in humankind to think that these tactics would lead to arrest and incarceration at least as often as they’d “work” — but I could be wrong. Regardless, though, there are now seven hundred and thirty-two* cripplingly self-conscious, dim-witted little boys (of all ages) out there in the world who will be receiving Hoinsky’s book and reading his mental diarrhea.

Some of them are bound to try his tactics. I still don’t think they’ll “work,” by and large, but I wouldn’t want to be any of the women at whose expense they fail, either.

The thing is: the backers are listed right here, and though they’re not required to, the vast majority appear to provide their real names (first and last), their location, or both. 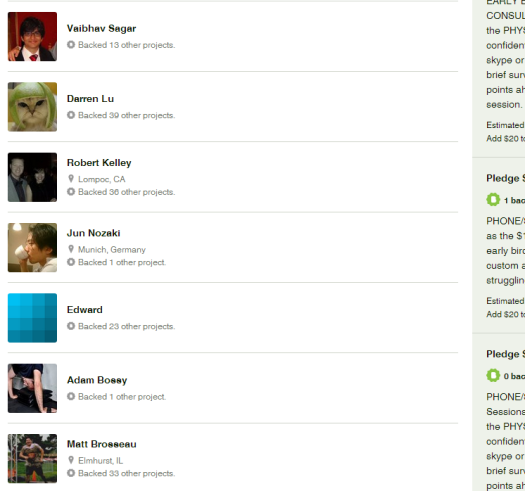 I think if I were a woman who is likely to go out…anywhere, ever, I’d look through that list for guys near my area. If I found one, I’d find out as much as I could about him, through Facebook, Twitter, Google, whatever — and let’s face it, if he’s leaving his whole name on a Kickstarter for what is basically a criminal instruction manual, there’s likely to be a lot of info on him out there. And then I think I’d make sure all my friends knew everything about him that I now knew.

(Just for instance: one of them is Frank Galatis, who lives in Chisago City, Minnesota, not at all far from me. This is his Facebook page. This is his LinkedIn page, which identifies him as an owner of Fallout Shelter Arcade, a video gaming center for Battletech:Firestorm and Red Planet games (Facebook). If I were that kind of gamer, male or female, I’d probably avoid that place on account of one of the owners being like super creepy.)

These are 732 guys who may or may not themselves be the same sorts of loathsome puerile woman-hating fuckwits that Hoinsky is; they could also just be insecure, desperately lonely and shockingly gullible boys. But either way, they’re going to be unleashed on the world with this nonsense in their heads, and in that case, is the second possibility really that much better than the first?

* Roughly. A few of the backers identify themselves as women, weirdly enough, and not all of them actually pledged enough to get a copy of the book.

[Hey, there’s a follow-up now: In Which Kickstarter Rules the (Corporate) World]