I’ve been aware of Dove Promises chocolates for a really long time; I’m almost positive my mom used to pack them in my school lunches. Dove makes really good chocolate, as affordable chocolate goes, and they come in convenient little pieces so that you can  eat about a hundred of something delicious without actually dying.

Now my office has them, constantly restocked in a big jar in a kitchen that’s otherwise filled with mostly healthy things. And I’m obsessed. Not with the chocolate (though that’s still great) so much as with the promises. The promises!! Man. The promises.

Each individually-wrapped piece of chocolate has a little message inside the wrapper — a “promise,” presumably — ranging from utterly meaningless (“Enjoy your life today,” to make one up) to bizarrely specific (“Build a snowman and breathe deeply the childlike wonder of winter,” to — not totally without basis — invent another). They all have a few things in common, though: they’re condescending, jaw-droppingly vapid and, if you assume (as I do from the tone) that the product is marketed mainly toward (a certain stereotyped subset of) American women, they’re at least a little bit sexist. Basically: they’re the worst and kind of also the best things in the world. They’re hilarious.

Lots of products are packaged with little messages not related to the product in any way — Snapple has trivia (does Snapple still have trivia? Is there still Snapple?), other on-mainstream soft drinks have quotes, Alaska Airlines used to have Bible cards. Promises strike me as unique, though, in that the name of the product itself leads you to believe that the point is the little three- to nine-word inspirational message printed on the inside of a terribly fragile foil wrapper, and OH JUST BY THE WAY you get a little delicious chocolate, too. The only comp I can think of is fortune cookies; nobody would eat those awful things if not for the message inside. You can get chocolate anywhere: the promise inside is how Dove pays the bills.

Or so suggests the name; it doesn’t seem to work that way. The description on Dove’s official site concludes with “Each piece is wrapped with a special PROMISES® message for a truly unique moment,” but it’s pretty clear it’s the “exceptional, silky smooth chocolate experience” that’s intended to hook you. Dove’s official Facebook page is full of references to Promises, the product, but I can’t find any references to promises, the messages. It turns out that the promises — product name and all — are an archaic figurehead that is best ignored and forgotten; they’re the British royal family to the chocolate’s Parliament.

We can’t have that. Someone writes these things, sits there and thinks about the kinds of things he (I’m just assuming it’s a he) thinks your stereotypical working mom might really want to hear while she’s enjoying her daily chocolate (ACK!!). Someone, or rather a group of someones, makes it possible for them to be printed on the inside of each wrapper. Someone designed the oh-so-sincere “Love, Dove” signature that accompanies each and every one. These contributions cannot simply be cast aside like so many, well, foil chocolate wrappers!

I have in my possession 22 Dove Promises wrappers, containing 14 distinct messages. Some I have collected over several days at work. Some — too many — I consumed the contents of today even though work also had fresh peanut butter cookies and even though I ate one of those too. (This is what I believe is called Dedication to the Craft.)

“Promises”  seems something of a misnomer. The majority of the messages come in the form of little life suggestions, or commands. Of the 14 messages, there are two that could arguably be called “promises,” and even those end up sounding a lot more like advice than actual promises. It’s possible that they started out as literal promises, years ago, but that over time they have evolved (as great art will) into a thing all their own.

I would definitely read a Vanity Fair oral history of Dove Promises.

At any rate, it turns out that Promises* is quite concerned about you — the probably female, probably middle-aged, possibly un- or underemployed, probably nonetheless overworked, probably lonely, probably overeating consumer — and has a lot of advice to offer. Some of it is contradictory, but you know, we’re complex beings, and what we need to hear from our chocolate at one time may conflict with things we need to hear from our chocolate at other times. Some of it is extremely cryptic, but what matters here is what it means to you. Promises works in mysterious ways. Promises does not apologize for the extremely varied- and generally low-quality photographs below, but I do (mousing over the images below will show you the text of the depicted promise).

* Just so we’re clear: from here on out, “Promises” is a singular, self-aware entity who is very concerned with your well-being.

Promises would like you to stop daydreaming and learn to appreciate your disappointing little life.

Promises knows that deep down, you don’t want to be sitting in your dingy little apartment stuffing your face with chocolate. You always wanted to be a basketball star, an actress, a singer, a prince. And to that, Promises says: get the hell over it! You are what you are. Live the life that you’re stuck with either way. Learn to appreciate things that are kind of hard to appreciate.

The first message below is the only one I have seen that includes a word in all caps or an exclamation point, which really just drives home how deeply Promises cares about you and wants to emphasize that you should get over yourself and cheer the fuck up already. 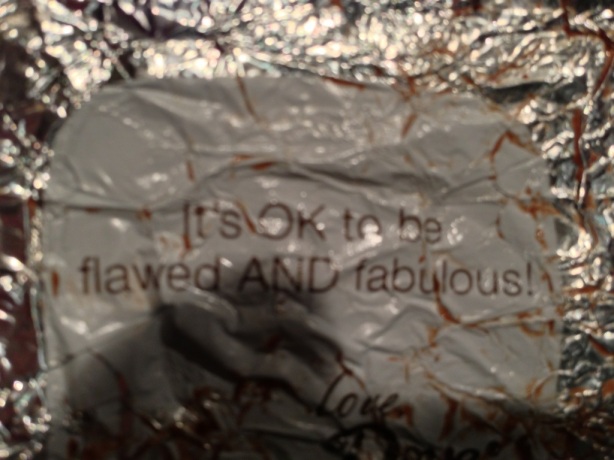 Promises would also like you to stop settling and learn to daydream a little bit.

Promises knows that deep down, you don’t want to be sitting in your dingy little apartment stuffing your face with chocolate. You have dreams, dammit. You have goals! And to that, Promises says: so get off your ass and go do it! Stop eating chocolate (well, maybe just this one more) and go live your life. Make those dreams happen.

Promises knows that this directly contradicts the above. One of the messages below is “feed your sense of anticipation,” which, to the extent it means anything at all, has to be exactly the opposite of “live in the present” above. Promises is okay with this and wants you to be okay with this, too. Promises knows that this, not that, is just what you really need to hear right now. Promises is the gay best friend. It just knows these things somehow.

I got four copies of the one above among my 22, which tells me, personally (Promises’ message to you may vary, of course), that I desperately need to find something I’ve been saying I’d do someday and go do it right the eff now. A follow-up post coming soon will feature a list of possible somethings. I kind of wish I were kidding.

Promises really wants you to be nicer to people and/or happier. 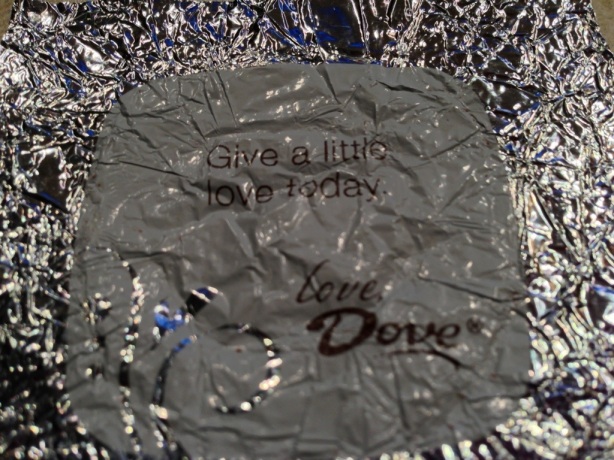 Also possible that Promises is just a really big Ellen fan (and yes, sadly, I do know that that precise lyric is not in the song…but now it’s in your head).

Got this one three times, which is quite thoughtful of Promises. I don’t know about smiling and it seems awfully naive of Promises to really think things are that simple, but I could definitely stand to sleep better.

Promises sees you, worried, stressed, eating chocolate, and eating and eating and eating. Promises knows you’re deeply sad and lonely and could use some cheering up. These messages vary from bland and impersonal “have a nice day!” type stuff to the kind of deeply personal thing you (read: I’d) only want to hear from your (my) best friend as s/he (she) hands you a box of tissues and perhaps a box of even better, more expensive chocolates. But in any case, the message is that frankly, you’re kind of a giant flaming humiliating mess right now and Promises is here to get you back on your feet, or perhaps to drag you, kicking and screaming, back in the right direction. Because hey, what is chocolate for?

Gotta be honest here: Promises lost me a little bit with this first one. It’s too much, barely even funny. It should probably be kind of offensive to you. It wasn’t written on Promises’ best day. 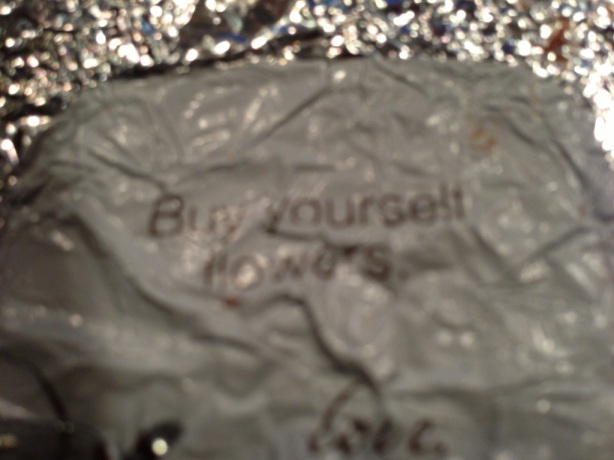 I mean, it can be a nice idea. Flowers are great, and if you don’t have a special guy or gal buying you flowers on the reg, why not buy yourself some? The thing is, nobody in the world wants to get that advice from the chocolate he or she is presently eating. Nobody. Nobody. It is at this point that I finally begin to doubt Promises’ absolute infallibility. 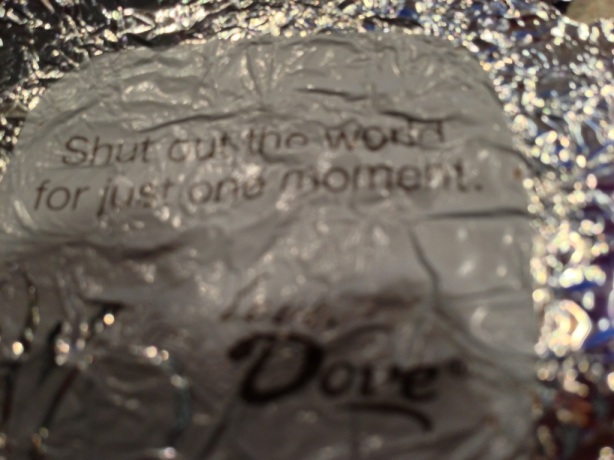 Sure, fine. You’re busy. Breathe. Take a bath, maybe (in fact I’m quite sure Promises has a “take a bubble bath” message, but I don’t have it in my current collection).

Yep, okay. Always a good idea. But not nearly specific enough. So.

…and Promises knows that taking care of yourself mostly involves the loving embrace of sweet, sweet DOVE PROMISES chocolate.

Promises has seen that you are vulnerable right now and has taken you to a very strange, very uncomfortable place.

I imagine I’ll write a follow-up as I uncover more gems — I may also start making my own — but that’s the Promises story in a nutshell. Promises doesn’t so much promise (other than arguably “you’ll sleep better” and “chocolate won’t let you down”) as guide, as whisper sweet and usually vague encouragement in your ear, as variously exhort you either to reach for the stars or to embrace reality and accept what you cannot change. Promises is your friend who is always there for you when you’re down, when you’ve been dumped or hurt or discouraged, when you’re shame-eating many tiny pieces of chocolate and crying in your bathrobe. Promises wheedles its way in and then, at your most vulnerable, seduces you. With still more chocolate.

Promises is the Nice Guy®, basically.

If you’ve made it this far, I’d love to see your best shot at a phony Promise below. Or for a more delicious challenge, go get some and share your best (worst) real one!

9 thoughts on “What Dove Promises Promise Us”